How to explain Vegemite… It looks like chocolate in color. But is made of basically everything chocolate isn’t. Vegemite is a yeast-based food paste that Australians are for some reason crazy about. 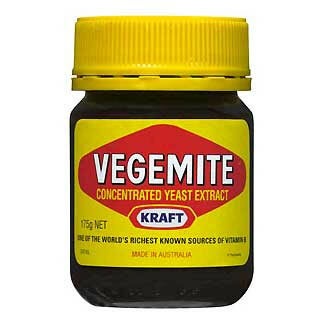 Photo cred goes to a blog (who probably also took the image from Google) about Vegemite, describing it as ‘The Black Death.’

It tastes like what you might think a beef bouillon cube tastes like; salty and narsty. Then you take that and spread it on toast, crackers, sandwiches and such, or fill pastries with it (update: apparently this isn’t true. I thought somebody told me this, but then even an Australian admitted a croissant stuffed with Vegemite would be absolutely gross). Don’t make the mistake of thinking it will taste like chocolate though. It’s like drinking out of a cup you think is filled with water, but it ends up being vodka. Unfortunately for how awful it tastes, Vegemite has no redeeming qualities like the ability to get you drunk. It is, however, the world’s richest known source of vitamin B. Personally, I’d rather just take a vitamin pill.

I think the video pretty easily sums up what we think of Vegemite and whether or not we’d recommend you try it.

Thanks to Scotty for filming and editing the video and for attempting to get us to like Vegemite.

Alaska is pure magic ✨⛰
😊
Who said office jobs had to be boring?
river season in full swing 🌊
Camping, by Pete
Ran away to Belize for a week with the Grange Girls