Under Down Under: Tasmania

Tasmania is the land under down under. It’s so far south it’s actually a jumping off point for Antarctica. Not to be confused with Tanzania (you know who you are). It’s not its own country either: it comprises the 8 states/territories that make up Australia.

I had a break from work until January 7, so I took the opportunity to go traveling over the New Year. After spending Christmas on the Gold Coast with my au pair family, I got up sickeningly early on the 27 to catch a 6 am flight to Tassie. I flew into Launceston in the north where my friends Kate and Chris (who I met last year in Scotland) picked me up. We stopped at the Cataract Gorge then had a picnic lunch overlooking the Tamar Valley on the way up to their family’s farm north of Beaconsfield. After a short bushwalk, I happily participated in the sheep shearing process. The sheep could tell I was nervous and that made it scared. I’ll leave it to the professionals from now on. I spent the night with their family before embarking on my road trip the next day.

You can click on the map below to see our journey. Start with point A at Launceston in the north.

Sunday morning I met the 4 other people I’d be road trippin around Tassie with for the next 9 days. We were two Brazilians, one South Korean, one Canadian and myself. We found each other on Gumtree, a site similar to Craigslist. Luckily our car rental company gave us a free upgrade to an SUV otherwise there is no way all of our stuff would have fit in the car (5 packs, 3 backpacks, 2 tents, 2 surfboards and other miscellaneous bags). We essentially had zero plans and just started driving West towards Cradle Mountain once we loaded the car. We spent an interesting first night in Devonport right on the water, doing our dishes in the water fountain and unsuccessfully trying to camp on the playground.

The next day we set off for Cradle Mountain. About halfway up, it started raining; we were pretty ill-equipped for the trek, with Whitney in flip flops and none of us wearing rain gear. We half-sprinted on the way down, screaming and singing to keep our minds off hypothermia. By the time we got back to the car we were soaked but the hike was worth it. We started driving out towards the east coast and stopped at a caravan park in a town called Longford. We got lucky the owner was still there as we showed up an hour after reception closed. We were greeted by a rainbow as we set up our tents, had hot showers and cooked our pasta meal.

Tuesday we continued our drive to the coast and stopped at Binalong Bay, at the southern point of Bay of Fires. We jumped in for a swim and the water was cold but the views were absolutely stunning. Sick of two nights of mediocre pasta, we ate mediocre Chinese food in St. Helen’s. We stopped at the first place that had a camping sign and scored a sweet spot right next to the water at a place called Diana’s Basin. We spent the night sitting next to the fire, drinking goon (boxed wine) and singing/playing the guitar. 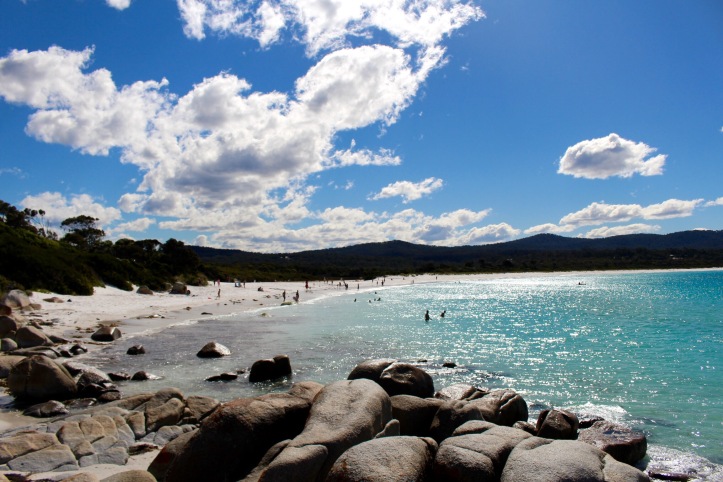 We woke up New Year’s Eve morning to an unsuccessful search for platypus in the basin before heading down the coast, stopping at a waterhole in Douglas Apsley National Forest. We made a salad out the back of our car in a giant pasta pan (white trash much?) and then went for a swim. The water was stunningly clear and felt cleansing as we didn’t have access to showers the night before where we camped. We continued along to Bicheno, where we stopped so Carolina and Ricardo could surf, although the waves were pretty meager. Just above the beach, there was a (cold) beach shower and picnic tables so we decided to bathe (hey you shower when you can on the road) and cook our NYE meal looking right out over the water. Ricardo and Carolina informed us of a tradition in Brazil to wear white, so the girls dressed up in… you guessed it: white.

NYE dinner
As we ate our slightly upgraded pasta meal (white sauce instead of red), we had a stunner sunset. Bicheno is known for its little penguins, so when the sun plunged below the horizon we staked out to try to find some. And we were not disappointed. At the first sign of seeing what I thought was a penguin, I sprinted off down the path to the rocks to get a closer look and scared the hell out of two little penguins trying to cross. We didn’t see them in a big huddle, rather in groups of two or three all along the path trying to make a run for their burrows. As night started to fall you could hear them calling out from the bush; it may also have been mating season? I felt bad for the little guys because this is clearly a scenario that happens every night: tourists shining lights in their faces trying to get a close look.

Since there was nowhere to camp and all the caravan parks were full, we hopped in the car around 10 pm and drove down to a camping area we noticed on our map in Freycinet National Park. Normally you get a spot by filling out a ballot months in advance, but if there’s spots the day of you can claim them. Somehow we managed to get the last little nook in the area, close enough to the beach that we could hear the waves crashing. We set up our tents, pulled out our goon and headed down to the beach. Another New Year’s tradition we learned from Shin is that in Korea everyone turns a year older at midnight (but it’s not your birthday). As the clock struck midnight on a New Year, we yelled out in celebration and congratulated Shin on another year as we sat on an excluded beach in the wilds of Tasmania. Can’t get much better than that. We talked about getting up to watch the sunrise and send out our New Year’s wishes, another Korean tradition, but we all somehow managed to sleep through it.

I realize this is getting to be long, so I’ve split this post into two parts. I’ll post the second one in the next couple days. Cheers!

river season in full swing 🌊
Camping, by Pete
Ran away to Belize for a week with the Grange Girls
Happy Gaia Day 🌏 ❤️ ✌️
When the trip reports say she won’t go this low... the Lady Escalante abides
Lil ol icehole reunion