I’ve been in New Zealand for almost a week now, and I’m on day 4 of the road trip with Meredith and Ellie. They flew into Auckland and I met them at the airport. We picked up our car and got a free upgrade from a crappy Mitsubishi Colt whose tires were held together with zip ties to a Hyundai x35 SUV (wahoo!). Good thing too because I’m not sure all of our bags/camping equipment/food would have fit in the smaller car.

We spent most of the first day getting the rental sorted and doing grocery runs before we headed southeast from Auckland to the Pinnacles, located on the Coromandel Peninsula. We did two shorter hikes rather than the longer one we had planned due to time constraints. We stayed at Gateway Backpackers on Thames for the night, which was a really cute family-run venture retiring two houses that have been converted into a hostel. We had a quiet night and Mere fell asleep before we could even crack open the bottle of wine we bought since she and Ellie were jetlagged. I wish we had more time to spend on the Coromandel Peninsula because it seems like a beautiful area, but we took off the next morning for Rotorua. 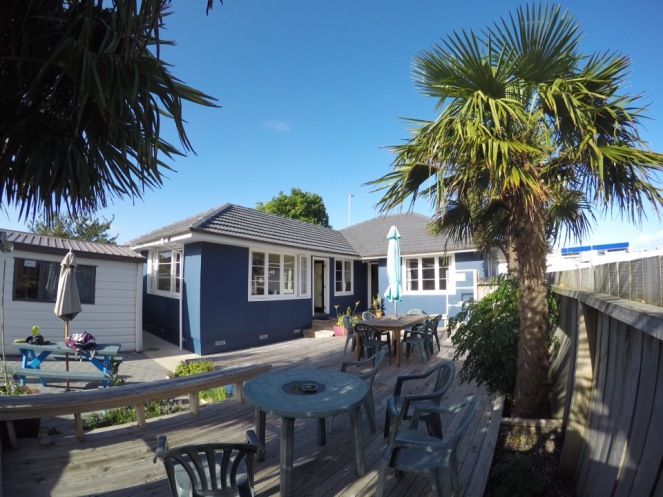 We stopped along the way in Matamata, where the Hobbiton set is located. I was debating whether or not to do the tour since I’m not a huge LOTR fan and I haven’t seen the Hobbit movies, but I recently read the book. Which is more than some of the other people on our tour, I learned. I’m glad I went though because the tour was really good. It’s set on farmland owned by the Alexander family, who leases the space to New Line Cinemas. When they shot LOTR, the set was built out of temporary materials with the intention of breaking it down afterwards. Although before they reached that point Peter Jackson decided to shoot the Hobbit movies, so when they approached the family to re-lease the land, they agreed but stipulated that the production company had to make the set permanent with the idea in mind of running tours. Crafty people! A knowledgable guide takes out around and provides you with any sort of information you’d like to know. Photo opportunities abound, and you can play games and with stilts down by the party tree and are even treated to a free Hobbit beer afterwards (it’s real beer).

On the way into Rotorua we stopped to zorb. Mere and I each did two rides – the first one together and the second we did a zig zag track separately. I decided I wanted to add a third one, which was the drop track; you go around the corner pretty slowly and then all of a sudden just fall. It was such an adrenaline rush. Three tracks was about $60 odd New Zealand dollars. On TripAdvisor people were mixed about the cost vs amount of time on the track. And while the tracks are short, I’d say it was definitely worth it.

We arrived in Rotorua in the late afternoon, so we had a quick walk down by the lake before we went to our campsite. Rotorua is known for Maori culture and the thermal waters and geysers that give the town a wonderful rotten egg stench. We didn’t partake in either activity since we arrived late, but to me it also seemed overpriced and touristy. Instead we enjoyed a beautiful sunset at our campsite set right on the banks of Lake Okareka. We were at a DOC (dept of conservation) campsite that was well maintained. Two park staff spent a solid hour going around making sure everyone had paid.

We woke up Monday morning early with the sun to pack up and drive down to Kerosene Creek, a natural (aka free) thermal hot spring seemingly in the middle of a forest. The water was almost scalding it was great! We didn’t have much time though so we didn’t get all the way in. We were on a schedule to make our tour for the Waitomo Glowworm Caves. Waitomo, the name of the town, is a Maori word for water shaft or tunnel. The glowworms are actually fly larvae, so really they are maggots, but glowworm sounds better than glow maggots. They give off an iridescent glow from the enzymes that are produced when they eat, so the blur is their poo (or something like that). They look incredible and actually hang down in thin strings from the roof of the cave.
At Waitomo in the Ruakuri cave you essentially have 4 options: a walk through the caves, a 45 min boat ride, a 3 hour blackwater rafting tour or a 5 hour rafting and abseiling tour. We opted for the 3 hour blackwater rafting since we heard the boat ride was pretty underwhelming. You have to be pretty fit to do the tour since it requires scrambling over rocks and jumping on tubes into the river in the dark. I was pretty bitter they wouldn’t allow us to bring cameras or gopros (for ‘safety reasons’) although I probably wouldn’t have been able to see much anyway. But we had a great time. We had to put on these ridiculous wetsuits as the water was freezing. We floated through the dark caves admiring the blue glow from above and our guides even brought a snack for us midway through. I would definitely recommend doing a tour in the caves. Afterwards we walked to a natural bridge, into some caves and to a waterfall, which served as a short since the spray was so intense. We camped that night in the middle of the forest halfway between Waitomo and Taupo at a DOC site with only two other groups.

This morning we continued on to Taupo, stopping first at Huka Falls (just a really powerful current of water where locals will sometimes kayak through which is crazy it was so strong) and at Craters of the Moon which was a geothermal walk. We then did a 2.5 hour boat cruise on Lake Taupo out to the Mine Bay rock carvings. We lucked out with the weather it was an absolutely gorgeous day and we enjoyed a nice cruise across the lake and a swim. The carving themselves were cool, but a bit of a let down because they weren’t carved by Maori tribes as I had assumed – they were carved in the 70s by artists depicting Maori legends.

Tonight we’re camping south of Turangi and getting up at an ungodly hour to hike the Tongariro Alpine Crossing which I am stoked for!