Whiew! I’ve been a bit neglectful of my blog the past couple weeks. It’s difficult to update when traveling. I know, my life is so hard #firstworldproblems.

After I returned from New Zealand (still working on follow-up posts), I went to Fraser Island with my friend Kate and her friends Jacinta and Nicole. Fraser Island is off the Queensland coast and is the world’s largest sand island. It’s a World Heritage Listed island and is curious because there is rainforest growing out of the sand. It’s hugely popular among backpackers, especially those doing their #eastcoasttrip. I’m feeling the hashtags today apparently. The island is beautiful in itself, but the main draw is the chance to 4WD on the beach.

We drove up to Rainbow Beach the day before our tour started for our briefing, complete with an old school safety video reminiscent of the horrible 80s videos we were made to watch in gym class at school. There were 4 cars total, each with a group of 8 people. In our group it was us four, Emma and Megan from Canada and Marco and Polo (jk, Alex) from Germany. The company, Fraser’s on Rainbow, clearly has been running this operation for a long time. They distributed lists to each car to pre-order alcohol for the trip (another big component) and the next day they had coolers pre-packed for each group that included three days’ worth of meals. It was nice we didn’t have to worry about any of the shopping.

Our guide was Luke claims to have lived in Australia for the past 25 or so years but still has the strongest cockney accent. He was awesome and he had a huge impact on what a good time we all had. His introduction speech was full of rhymes that I wish I could remember because they were really witty. The only one I can remember is not blog-friendly so I won’t share it. He hugely emphasized the fragile nature of Fraser and was reminding us to be sensitive to its environment. He referred to us as ‘humans’ and repeatedly talked of ‘Australia’ as if it was a distant land, far from the beautiful oasis of Fraser.

We stayed up late and woke up early, and over the course of three days we visited Lake Mckenzie, Champagne Pools, Indian Head, Lake Wabby, among others. We took turns driving and the second day we drove with Luke in the lead car in the afternoon. Emma and Megan were trying to drink their goon (boxed wine) in the back of the car, which was already bumpy, but made harder by Luke zipping through the sand tracks and leaving the other cars behind in the dust.

Lake Mckenzie is an absolutely stunning lake with water so clear it looks like it belongs in the Caribbean. It’s a perched lake meaning there’s no ingoing or outgoing source of water, which makes it even more amazing that the water is so clear. The sand is made of pure white silica sand that isn’t affected by heat. It can shine pure silver or gold. Apparently aboriginals used to rub it on their skin, in their hair and on their teeth to cleanse themselves.  We gave ourselves facials with it and my skin did feel softer afterwards. I had my own toothbrush though so I didn’t feel the need to rub sand on my teeth.

Champagne Pools is the only part of the island where you are allowed in the water. And that’s only because it’s essentially a giant tidal pool that is protected from the ocean by rocks. You can’t swim in the ocean off Fraser due to strong rips and high numbers of sharks. Luke told us that it’s called Champagne Pools because it’s filled with goon – champagne is too expensive. In reality, when the waves crash over and around the rocks the water tends to look bubbly, like champagne.

Indian Head is the most easterly point of the island, and the second eastern-most point of Australia behind Byron Bay. Sadly, it’s the site of where a large number of aboriginals living on the island were rounded up and paraded to the top and made to jump off and commit suicide. On a lighter note, it’s a nice place to sit and spot wildlife. While sitting up there, we spotted a turtle and possibly a sting ray.

Lake Wabby is a green-colored lake that is the deepest on the island at 12m. It’s situated at the bottom of a sand dune, and is likely to disappear under the sand at some point. To get to it, we hiked 45 minutes through the RAIN forest (it was raining), across a sandblow and down the dune. Luke encouraged us not to run down the dune and dive headfirst into the water, since people have been paralyzed that way. And of course, there were one or two people doing just that. There’s a type of fish in there that likes to eat the dead skin off of people’s bodies, like the strange feet massages you can get in Thailand. I didn’t see or feel any there, but I did have a fish bite my butt in Lake Mckenzie.

Although it rained the last day, nobody seemed to mind. We had a gorgeous day our first day and pretty good weather on the second one. To make up for the bad weather, we spotted dingoes on the last day around the island. Dingoes are a type of wild dog that roam the island. From our safety briefing and the signs around the island, they’re made out to be ferocious animals, but Luke said he’s woken up on the beach to dingoes licking his face and the ones we saw mostly just ignored us. Maybe that get a bad rep from ‘the dingo ate your baby,’ which apparently actually did happen (police thought they mother and killed her infant, until they realized it was the dingoes). Unfortunately they have to be put down if they attack, but the attacks are usually prompted from idiot tourists who provoke them.

I had a great time on Fraser, and I got along great with the other people in our car. Three days didn’t feel nearly enough and although we were constantly out and about, it seemed we only visited a fraction of the island. I was nervous at first about going in a 4WD car with other backpackers who may or may not have ever driven in Australia or in the sand, but it was fine and riding along the beach was a blast. The only downside was we were constantly running into other 4WD groups and tourists, and that’s was off-peak season. I can’t imagine how crowded it must be in the summer.

Anyway, I would go back in a heartbeat and I definitely recommend anyone interested in visiting! 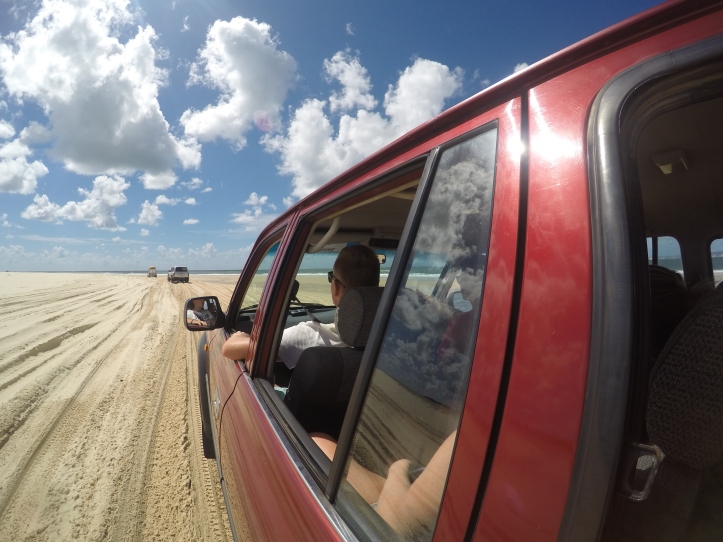