The Aquarium of the World

Along the malecon (boardwalk) in La Paz there is a statue of Jacques Cousteau clutching a mask and staring out to sea. To some, it might seem out of place; why would there be a statue of the Frenchman here in Mexico?

To others, it makes perfect sense. Jacques Cousteau called the Sea of Cortez ‘the aquarium of the world.’ He was not wrong; you can find whales, dolphins, turtles, whale sharks & over 800 species of fish here!

Just from my two months here in Baja, I’ve witnessed a stunning amount of marine life. Firstly, there’s the reason I’m here and what accounts for the large majority of tourism in La Paz: whale sharks. They follow the food source which is pushed north by currents and blown into the bay by the northern winds. The sharks typically arrive in October and stay until March, but in past years they’ve arrived in July and stayed til May. One year there were sightings year-round.

Starting in December, gray, humpback and blue whales travel thousands of miles down the Pacific coast from Alaska to Baja to breed and typically stay until March. The gray whales stop on the Pacific side, but the blues and humpbacks continue around the peninsula up into the sea. I went on a whale watching tour in Cabo and was treated to amazing displays of breaching and fin slapping. In the Bay of La Paz, the humpbacks spent close to a week eating right in front of one of the beaches and we could often see them breaching, slapping or spouting from the research boat. Sometimes they’re in the whale shark area – there was one only 100 yards from shore a couple weeks ago!

There’s a fairly large colony of sea lions off of Espiritu Santo island at the edge of the bay. I went there a couple weeks ago and while the sea lions weren’t very active during the dive, we stayed and snorkeled with them for a bit. If they’re feeling playful, they swim right next to you, play with your bubbles and sometimes chew on your regulator hoses. They have their pups in the winter, so there were many cute young bubs to watch. 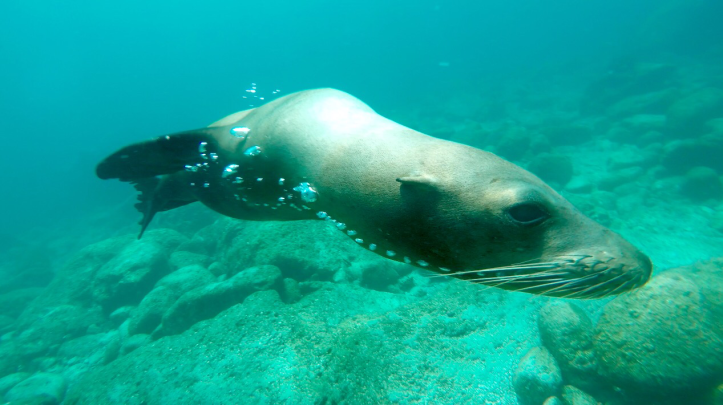 For those who follow me on Instagram, you may have noticed a barrage of dolphin photos and videos. There’s a resident pod of dolphins that live in the bay and who we see at least once a week. They’ve swum past while we’ve been in the water monitoring the sharks and multiple times they swam right under me and circled around, curious about who I was. One time though, they started displaying territorial behavior, encircling us and getting closer with each spin. While dolphins are cute, it’s important to keep in mind that they’re wild animals who are highly intelligent and you need to respect their habitat.

Baja is a huge breeding area for many different species of sea turtles. There are seven species of sea turtles in the world and in Baja alone you can find five of those (Hawksbill, Loggerhead, Black, Olive-Ridley, Leatherback). Unfortunately I missed the hatchling season where you can help out at turtle camp and watch the newborns make a run for the ocean. Just another reason to come back!

Manta rays are also found here..apparently. I have yet to see one. Darren keeps promising seeing one in the whale shark area but I’ve long given up on that dream. Sightings are becoming less common. Same with hammerheads; in the 70’s huge schools of hammerheads could be seen on the back side of Espiritu Santo island, but the groups have gotten smaller each year – an unfortunate effect of illegal and overfishing practices. There are, however, large schools of mobula rays which I’ve seen jumping out of the water. There are over 800 species of fish found in the Sea of Cortez. I went diving at Cabo Pulmo this weekend, and I didn’t see any manta rays or bull sharks like I was hoping, but we spent our entire second dive swimming with a school of a couple thousand big eye trevallies. It was a surreal experience.

The Sea of Cortez and Baja California and absolutely worth a visit. And just a plane ride away from the states!