Hello from the Outside

This summer has been a busy one. Is it still even summer? Time just flew by.

After the road trip with my mama in June I started training in California to lead tours round the US. My training group was awesome there were 10 of us from across the states and one Canadian for good measure. Our training lasted 3 weeks and we got to travel to cool places like Monument Valley, Zion and Yosemite all while learning how to run trips. Our manager was awesome and while we worked hard we also played hard.

Once training was over we were on our own and I felt like I was thrown into my first trip prepared but also not knowing what to expect at all. There’s a term we like to used called ‘swanning’ – on the surface you look calm and like you know what you’re doing but underneath you’re paddling like hell. That’s exactly how it felt.  My first trip was a two week western trip hitting San Diego, Grand Canyon, Vegas, Yosemite and San Francisco. On day 1 I was so flustered but I still managed to catch up with my friend Juliette who I met in New Zealand last year. I essentially spent the whole time stressing out and she just listened, bless her. By day 2 I felt like I had it down. But then it fluctuated the rest of the trip. Overall it went well and I had a good group. 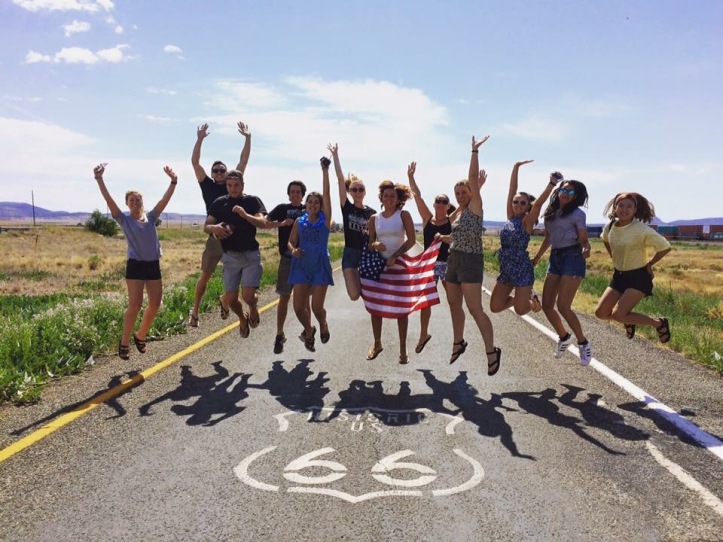 I’ve just finished my third trip and I only have one more before I wrap up the season. After the first one finished in LA I sprinted east to New Jersey where I picked up a group and we made our way down to Miami. I did this one with another leader who had his own group, and it was nice to have someone to bounce ideas off of and destress with at the end of the day.

My third trip took me on a loop from New Orleans stopping in places I hadn’t been before like the Great Smoky Mountains and Natchez, MS. I had a great group of people for this one and we somehow or another ended up making a bachelor spoof which one of my passengers filmed and edited.

My next trip starts Friday from Miami and will bring me back to Jersey where I end my season. I’ll only have a couple days at home before I fly over to Europe (thanks bonus miles!) to have one big reunion trip.

I’ll meet my friends from teaching in France in the town where all the magic happened – Dax! Then I’ll pop over to Italy to see my friend Steph who teaches at an American school. Then to England to see friends Kiera and Jonny from my time in Aus. Then back in France before flying home at the end of October I’ll catch my friend Alisa from tour leader training who will be doing the same teaching program that I did 3 years ago!

I’m in the process of applying for a winter job at ski resorts out west so hopefully that’s where I’ll be working in the off season before returning to tour leading again next summer. That’s the plan for now anyway!