I must admit I did not come up with this phrase. It was my brilliant friend Natasha who was the mastermind behind the rhyme. She coined it when my teaching friends (her, Emi, Rosalyn, Emma) and myself decided we were going to reunite this year, four years after we met and taught in France.


We all met when we got placed in the little town of Dax which I can say with confidence none of us had previously heard of. When I found out I was placed in Dax for my year of teaching in France someone actually told me not to live there because it was super boring and full of old people. Half of that is true, you can decide which. Anyway I was very happy with my decision to live in Dax rather than trying to commute from Biarritz or Bayonne because I met those 4 girls and we had a blast. We decided that the 5 of us needed to reunite as we’d only been able to meet up 2 or 3 at a time since. France was the obvious choice. As long as we were going to France it had to be Dax. Thus the basis of my euro trip.

One of my best friends from high school, Steph, is currently teaching in Milan so I decided to pop over to see her after Dax. And then my two pals Kiera and Jonny that I met in Australia both live in the U.K. so we decided to reunite as well. I also wanted to see my au pair family from Moliets, as well as my friends Claire and Niro (who I worked with in Airlie Beach).  AND planned on seeing my fellow tour leader and friend Alisa who is doing the same teaching program in France this year that I did before. It was essentially one big reunion trip.

I flew into Paris on October 6 and stayed with Rosalyn (from England but who is doing her masters in Paris) for one night before we met Emma fresh off the plane (from Canada) and took the train down to Bordeaux. Emi (from California) was waiting for us there since she had been traveling around France and Italy after taking her bar exam. Natasha (from England) flew down after work on Friday and met us at our Airbnb where we stayed for one night before continuing on to Dax.

In Dax we stayed with our friend Maylis, who Natasha and I had an English/French exchange with the year we were there, and whom Emma later stayed with for 5 weeks during her teaching internship. She is a legend for hosting all 5 of us that weekend and it was great to see her and her partner Jean Luc. Being back in Dax was jokes and we just pal-ed around while recreating an old photo, seeing random people around town and visiting our favorite coffee shop. The owners of the shop were so tickled that we were back and no one could really understand why we were on vacation in Dax (because that’s not a thing). It was a great weekend, only slightly marred by the stress of a lost passport situation as we saw Natasha off back to England (all was resolved in the end). 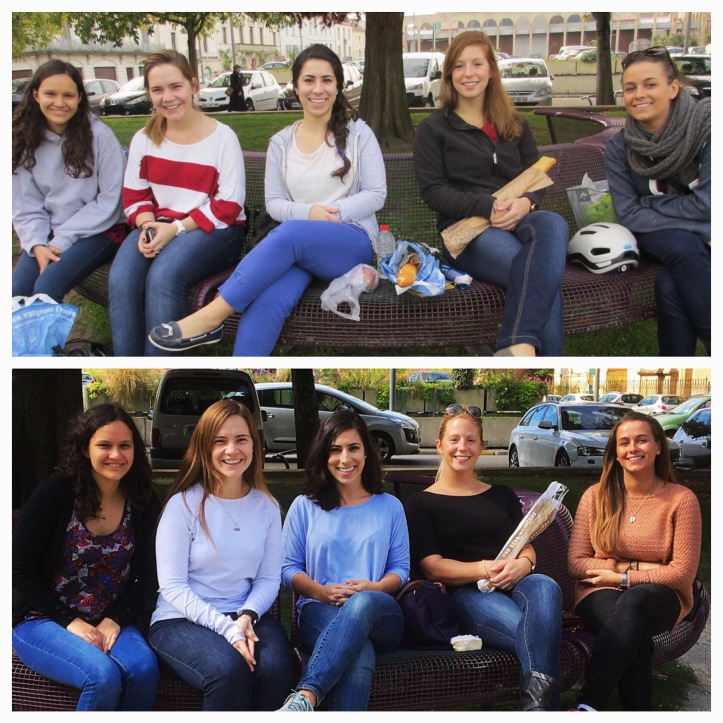 Next to leave was Emi who was going to be making her way back to the states to start a fancy lawyer job. Then I left that Monday and Ros and Emma headed out the following day. As I mentioned Maylis is a star and she lent me her car to drive to Moliets (~40 min away) for two nights to spend time with my old au pair family. They moved into a nice new house and the boys are so grown up they’re both chatting away. They have a new au pair from Italy so we all had fun playing games and sharing meals. The little one Alban asked me to stay for Halloween since I had taken them trick or treating before and given the neighbors candy to then give back to the kids (shh..) since France doesn’t really celebrate Halloween.


But I continued back up to Bordeaux where I stayed with Claire and Niro for two nights. We lived and worked together in a hostel in Airlie Beach in Queensland for two months and they’re soon off again for a year in New Zealand. Claire even switched her schedule around to hang out with my for a day and we treated ourselves to a nice meal then had to walk it off since we ate too much. It was great hanging out with them again and I also briefly saw my friend Guillaume who I traveled with in Western Australia. Then it was off to Italy for me.

I flew into Milan on a Friday and Steph and I went out for aperitivo which I’m told is a very Italian thing to do, except we seemed to be surrounded by tourists. The next day we drove with her friend and friend’s boyfriend down to Perugia where there was the euro chocolate festival going on, biggest one in Europe, and I’m a sucker for chocolate so I obviously loved it. It rained the first day which was a blessing because the streets were relatively empty compared to the next day which had beautiful weather but you couldn’t move through the crowd without an elbow to the face or inadvertent bum touching which usually (thankfully) turned out to be someone’s purse. 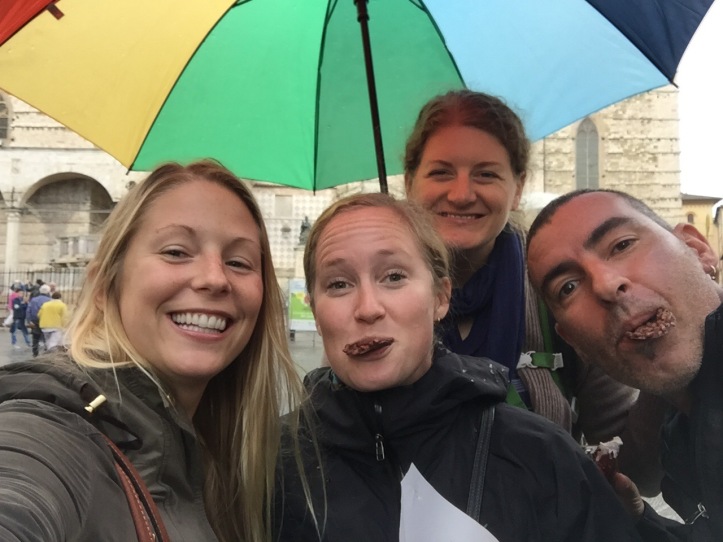 After Perugia I took the train to Cinque Terre where I spent a day and a half hiking along the coast between five picturesque seaside towns. Two of the lower aka easier sections of the trail have been closed since 2011 due to a landslide (yikes) but have yet to be repaired because “lol it’s Italy.” So I sweated it out on the harder sections and by the end of the day I couldn’t feel my feet. These two days I spent the majority of my time alone, although I didn’t mind. It was nice just taking in the beauty of the area and stuffing my face with good (but sometimes mediocre) Italian food. I went back to see Steph for two more nights in Milan before flying out to England to meet Kiera and Jonny who I pal-ed around with for a couple weeks that time I was “stranded” in Alice Springs.

Kiera met me at the airport and I stayed with her for a night at her wee Scottish grandparents house in Northampton. That Friday (we’re up to October 21 here) we picked up our rental car and scooped Jonny from his train down from Scotland outside of Manchester. This was admittedly was very poorly planned since it added time to our drive and he could have gotten off earlier/closer to our destination but none of us thought about it. Our destination was the Lake District because every English person I’ve ever met (well a lot of them) has told me to visit and I now understand why. Its beautiful. We loaded our packs and decided on a 2 day overnight hike which included Scaffel pike (England’s tallest?). Our camping spot after the first day’s hike was in a place called Wasdale, which on the map looks like a small town but in reality is an inn with a pub and fields of cows and sheep. I’m not complaining though because the landscape was idyllic and everything about the entire area was so English.

We conquered Scaffel Pike and were so tired that on the 3rd day we patched the idea of hiking and just explored a bit by car. That night we stayed in a town called Keswick and while sampling the pubs we ran into a very random and happy go lucky guy named Ben who busks in town playing the steel drums. He was barred from half the pubs in town and Jonny decided that we were going to follow this guy around town for the evening and so we did. The next day our little reunion was sadly over and we dropped Jonny off for Scotland, then the car, then Kiera saw me off on a bus to Luton.


I stayed with Natasha in Luton so I was happy to get to spend a bit more time with her after Dax. We explored Cambridge for a day with my friend Holly who I met on one of my tours this summer. We went punting which is a very Cambridge thing to do and just marveled at how cute the whole town was. Very touristy though. 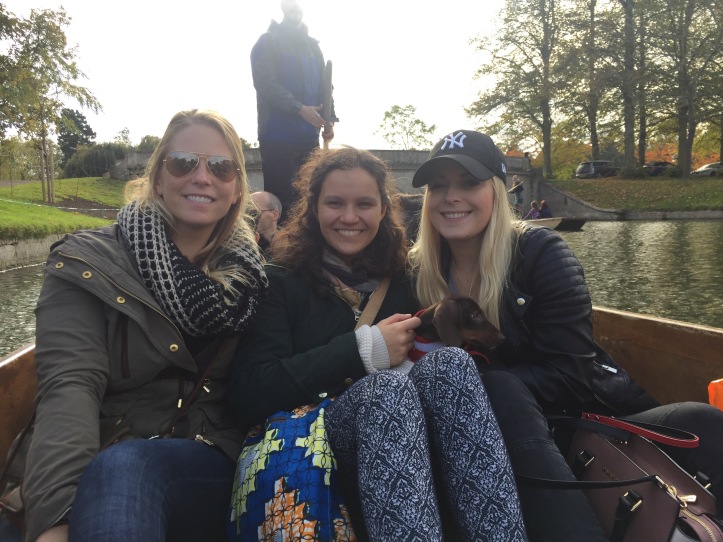 From Luton I flew back to Paris and met Alisa. We rented a car and headed west to Brittany, staying in Airbnb’s and exploring places like Saint Malo, Cote du Granite Rose and more. We had a general idea of where to go but it was kinda fun to not plan too much and just decide the morning of what to do that day and where to stay that night. Besides Saint Malo we stuck mostly to nature-y areas because we both missed the hiking and exploring from our jobs this summer. All too soon our adventure was over and we were back in Paris dropping the car off. I spent my last night with Rosalyn again, ending my trip where I started it!

It was a great 3.5 weeks (which was made affordable by flying on credit card points holla) seeing many different groups of friends. I’m sure I’ll be back to Europe soon enough.

But for now my next adventure is going back to my whale sharks in La Paz for two more weeks of volunteer research 🙂 I’m currently waiting to board my flight to Mexico.

Lil lift chair photo shoot & also @pabstblueribbon ‘s next ad campaign
It me!
Snow.Snow.Snow.Snow. Snow.Snow.Snow.More. Snow.Snow.Snow.
Skied in to an abandoned town to sleep in a dry cabin complete with mice, and maybe ghosts... sounds like your standard ladies weekend right?
Night skiin is pretty fun 🌝
Skiin in Wydaho with mama