Back with the whale sharks

I had a couple weeks free in the beginning of November before Thanksgiving. As my friend Mal recently put it “you don’t like to stay in one place do you?” Which is like saying “you like cookie dough don’t you?” I love cookie dough.

I had been floating the idea of going back to La Paz pretty much ever since leaving. Flights to Cabo were looking good and Darren and Manolo, the directors of Whale Shark Research Program, had said I was welcome back, so I said to myself ‘¿porque no?’

I flew out on November 5 and had to spend the night in Los Cabos since I had a late arrival. My friend Stephanie, who researches sea turtles, arranged to put me up with her friend Carla in San Jose, so I didn’t have to worry about finding accommodation which was great. 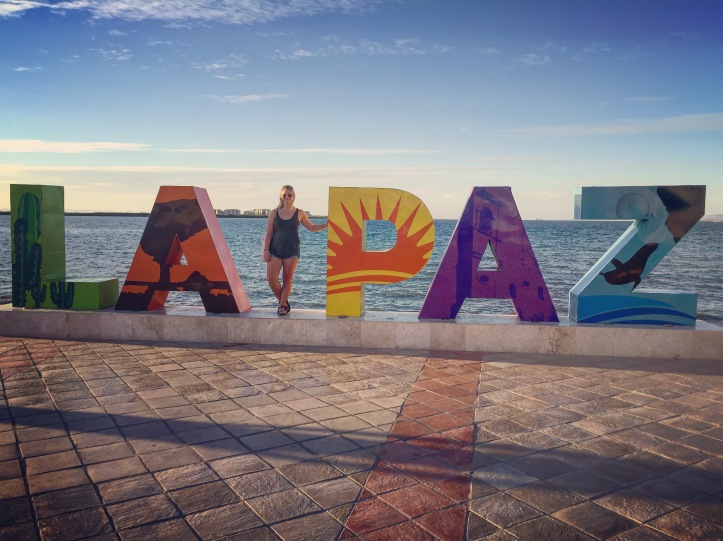 The next day Carla dropped me at the bus station and I arrived in La Paz 3 hours later. Darren was waiting for me there and took me to the new volunteer house which is on the opposite side of town from where the house was last season. This house was nicer and bigger than the old one; it had A/C, much more natural light, and a full kitchen – all things the previous house lacked. The only downside was the lack of taco stands in the neighborhood! But I can’t complain because it was only 2 blocks from the malecon (the boardwalk) and was an easy walk to town.

There were two other volunteers there during the time I stayed; Alli from Germany and Claudia from Switzerland. When I arrived last season I was the only volunteer for an entire month, so it was nice this time to already have 2 housemates aka 2 people to hang out with aka 2 people who would ultimately become friends.

That week we went out monitoring (researching) 3 times and the first day we had 17 encounters with sharks which was awesome! It doesn’t matter how many times I’ve swam with whale sharks by now, every time I get in the water next to one I’m still amazed at their size and how seemingly calm they are, but also how quickly they can swim when they want to. They’re the biggest fish (yes fish/shark not whale) in the ocean and I missed their spottyness very much. They have so many spots. Like, a lot of them.

It felt like the good ol times; Darren situated on the bow of the boat looking out for sharks, Manolo behind the wheel captaining and the volunteers jotting down information on the wet sheets, with fins and masks sprawled about. I helped out with the same duties I had last season: taking identification photos, taking photos of injuries and diving down to identify the sex of the shark. Back on land we sort the photos into how many separate encounters we had that day, run them through the database to identify which shark they are (or if they’re a new one), and enter behavioral information and other data into a spreadsheet.

Last season when we had a new shark on our hands we were able to give them names (Obama you had one named after you! [If someone has his email address and could send him this link so he knows he has a whale shark named after him, I would appreciate it]). This year however, the system has changed so that it’s more uniform and all the sharks names are Mex.001, Mex.002, etc. So it’s not as exciting getting a new shark as it was before, but on the other hand it saves time not looking up new names for sharks on babynames.com, which is admittedly what we spent time doing last season.

The second week we went out two days and both days we had clients – people who come to swim with the sharks but who are interested in learning about our work and the conservation aspect, rather than just going with a tour operator. One group came up with Philipp, an Austrian expat living in Cabo San Lucas who runs an eco-conscious tour company called Cabo Trek. The following day the group was four Canadians who were in Baja chasing good wind for kite surfing. We also organized an educational event at an orphanage in town and made a whale shark piñata as well as other activities for the kids to learn more about marine conservation.

When not out on the water, I caught up wth Stephanie and my favorite dog ever, Pepe/Baluu, who I fostered for two months last season before he moved in with Stephanie. He even stayed over for a night and both Alli and Claudia fell in love with him because how could you not?

I briefly saw Alexia and Rafael who are an awesome French-Mexican couple that run their own dive business called Dive in La Paz. I did my advanced open water with them when I was here before so if you ever find yourself in La Paz wanting to go scuba diving you have to look them up!

On the weekend Alli, Claudia and I went to Cerritos on the ocean side of the peninsula with Miguel (who is affiliated with the project), his friend from home and Karla, Manolo’s girlfriend. We rented surfboards and had fun attempting to surf, but the current was really strong so it was a fight each time to get back out. We had a picnic lunch on the beach and stayed until sunset, doing handstands and watching dogs jump onto people’s boogie boards.

On Tuesday and Thursday nights Claudia and I played beach volleyball down on the malecon with a group who called themselves ‘grupo alcoholico deportivos’, which means alcoholics sports group. Everyone was really friendly and also really good at volleyball so it was a bit intimidating at first, but Pedro the guy who organizes it and the others were really encouraging and made us feel like a part of the team. They were really patient with our lacking level of Spanish as well, but it was good practice and a few of them spoke good English anyway. A few people from the team even came out for my last night as a farewell which was fun. 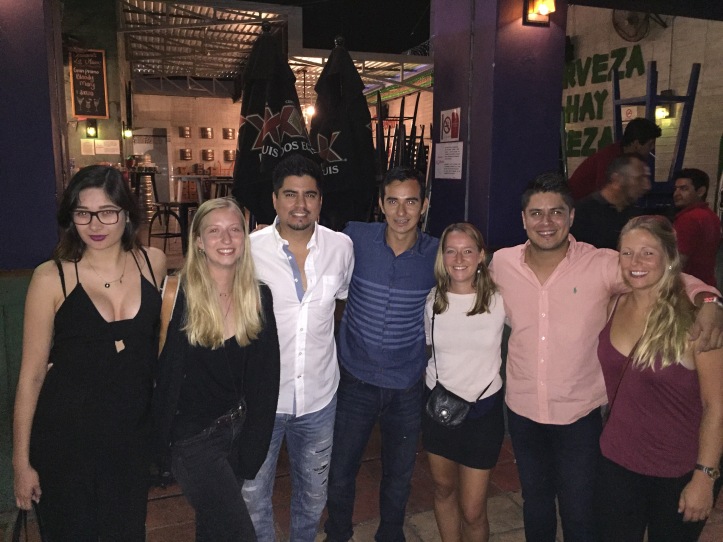 My last day before flying home, Alli and I decided to do a freediving course with Manolo. He’s an AIDA instructor, which is the freediving equivalent of PADI. After listening to a presentation on theory, we then headed to the water where we did a static session in the shallow water, which is learning how to relax your mind and breathe before holding your breath for controlled intervals. I only held my breath for 1:30 which was very short but I got stressed out and panicked. I need to work on the relaxation part a bit. Alli did better at 2:30 but we were all bested by a guy who held his breath for 6 minutes. Even Manolo was impressed. 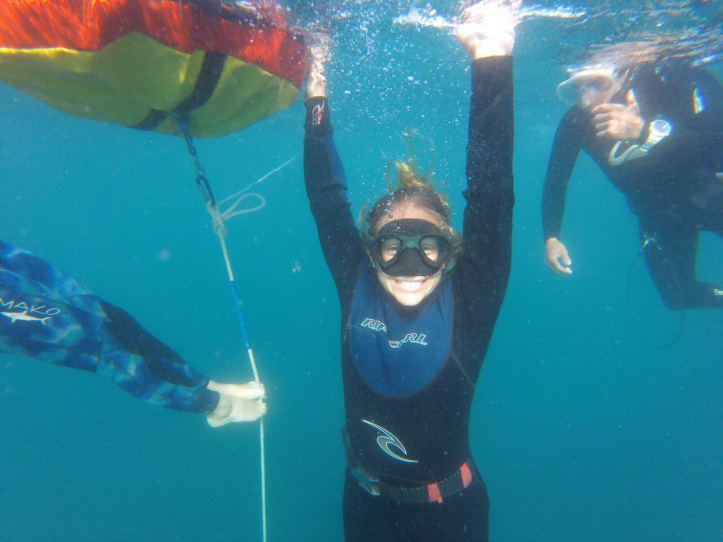 Then we went out to deeper water for the last section of the course which was the actual diving bit. We took turns inverting ourselves while slowly pulling down the rope while equalizing our ears to see how deep we could go. The deepest I went was 9 meters, so about 27 feet. I was happy with it! I’d love to try it again it was a really neat experience and I can see how people get addicted, wanting to go deeper each time.

My time in La Paz came and went very quickly, but it was great to go back and see old friends, make new friends, see my beloved doggy friend and of course swim with the sharks again.

Big thanks to Darren and Manolo for welcoming me back a second time. If you know anyone who is interested in volunteering, let me know!