I had bought plane tickets months ago to travel across the pond in April, but then my plans changed and I needed to decide on a new destination. I played around with a couple different ideas- Portugal, Belize, Mexico… then I started looking at flights to Nicaragua because for a couple years now I’ve been wanting to travel there after hearing people rave about the country. Within an hour of that idea, I had already changed my flights to Managua, the capital city.

At first my parents were excited about Nicaragua but then they got the idea in their head that me traveling solo around the country was exceptionally dangerous. My mom tried in vain to get me agree to either her or my dad joining me on this trip. I said ‘sorry I love you both but neither of you are coming with me’ and I wouldn’t tell them my itinerary until I had already flown out of the country. By the way, second only to Costa Rica, Nicaragua is (probably) the safest country in Central America and not once did I feel unsafe.

I had exactly one day at home between flying home from Colorado before flying to Managua. When I arrived I went immediately to Leon, because I’ve heard Managua is boring and potentially the only place you might feel unsafe. Leon is in the north and famous for the volcanoes in the surrounding area. If I had more time I would have loved to do one of the multi day treks that takes you around the volcanoes, but I only had one full day and I was set on an adrenaline pumping activity I’d heard about a couple years back: volcano boarding.

It was an Australian who brought volcano boarding to Leon and he spent a while trying to figure out the perfect way to do it before he settled on a toboggan/sled like contraption. The volcano where this takes place is called Cerro Negro and it’s still active- we could see sulfur pumping out of the crater on the hike up. We headed out of the city on a dune buggy -like vehicle which was open in the back and we had to be careful of tree branches snapping us in the face on the way there. We hiked up the back side of the volcano for about an hour until we reached the top then we put on our orange prison jumpsuits and goggles. The company had someone at the bottom with a speed gun to record our speeds because the fastest guy and girl each won a prize. The record is 95 km/hour which is pretty fast for sliding down a sled on a volcano. If you know me, you know how competitive I am, so I was bummed when I came in second. But I did tie the fastest guy at 70 km/hour so that was compensation.  After Leon I headed down to San Juan Del Sur and stayed at probably what is one of my favorite hostels. It’s a place that’s located outside of the town in the hills but it has a gorgeous view over San Juan and the ocean. A girl I met over two years ago in Australia told me about it and I’ve had it written down in my phone ever since. Someone I spoke with in Leon almost talked me out of staying there since it wasn’t in town and I’m so glad I didn’t listen because I had a blast. The hostel had a nice long pool to cool off in, they offered family style dinners every night which was a good way to meet other travelers and they even had two rehabilitated spiders monkeys living there, one of whom would poke you during breakfast and dinner trying to get attention. San Juan is known for the Sunday Funday pool crawl which is completely overpriced since you pay $35 for a tshirt and entrance to the 4 hostels, but I still had an awesome time. I meant to leave that Monday but I enjoyed the hostel and the people I met so I ended up staying another night and traveled on to Ometepe the next day with Lucy and Charles – an Australian/English couple from my hostel -who were a few of my favorite people I met on the trip.  Source: Sunday Funday Pool CrawlOmetepe is this awesome island in the middle of Lake Nicaragua that has two active (?) volcanoes on it. It’s kind of divided into two parts- the side with the larger volcano and the side with the smaller volcano. We stayed on the smaller side at this little hippy hostel called El Zopilote. The land is shared among multiple families who participate in organic farming and permaculture, among other things. The dorms are all open air and the toilets are organic (no flush!). They had a restaurant at the hostel that used a lot of their ingredients from the organic farms on the grounds. The first day we went to these natural springs called Ojo de Agua which was nice to cool off in and then the hostel had a pizza night using their wood fire oven. The following day I got up early to climb the (smaller) Maderas volcano. Just because it’s smaller didn’t mean it was easier than climbing the bigger one, which is what the guide said. The hardest part was how muddy the top third of the trail was and it seemed that everyone slipped at least once.  I was traveling over the Semana Santa holiday, which is the week leading up to Easter. It wasn’t really an issue until the day I was leaving Ometepe. The ferries were insanely crowded due to everyone heading to the beach. I was making my way to Managua to catch a flight to the Corn Islands and was told by multiple people that there weren’t any express buses due to the holiday. I may or may not have been ripped off but I only had 2 hours to get to the airport and where I got off the ferry was exactly 2 hours from the airport so I just decided to pay a cab driver to take me straight there. Although I did wish I had taken a chicken bus at some point because I’ve heard those are an experience.

I ran into an English guy Rob at the airport who was at my hostel in San Juan and was also heading to the islands, and then we made friends on the flight over with Courtney from Canada and Chloe from England. The flight was only an hour to Big Corn then we had to take a panga boat on decently choppy waters over to Little Corn. This was an experience all on its own – they cram 40 or so passengers onto a very small boat that looks like it could hold about half that many people. Then you sit shoulder to shoulder with the life vest practically choking you while you wait for the military personnel to write up the permit for the boat ride. If you sat on either of the sides of the boat you came away at least 50% soaked. If the waters are too choppy the boat doesn’t go at all. But once you step off the boat on Little Corn, you’ve already forgotten about the boat ride.

The island is exactly what you’d imagine a little Caribbean island to be like – beautiful turquoise waters, palm trees and people walking barefoot on the pedestrian-only island. Courtney, Chloe and I were staying in the same room at our hostel and we had 3 Dutch roommates and decided to nickname our room the Danger Dorm.

During the short time I was on Little Corn I fell into a routine; I would dive once or twice during the day, we’d get lunch afterwards and go walk around the island, go back to drink Flor de Caña rum while getting ready to go to dinner and then figure out where people were hanging out that night – whether it was one of the beachfront joints, the reggae bar which was a mix of locals and travelers, or the lighthouse hostel (not an actual lighthouse) which was a bit of a trek but had live music and an awesome vibe. One of the interesting things about Little Corn was that there was no electricity between 6 am and 1 pm. I didn’t mind it so much but the worst part was that the fans would go off at 6 am and it was already pretty hot and humid that early in the morning. So essentially you were forced to wake up at 6 and try in vain to sleep a couple more hours while you were uncomfortably hot. Fun fact: the majority of the time I walked around the island without any shoes. 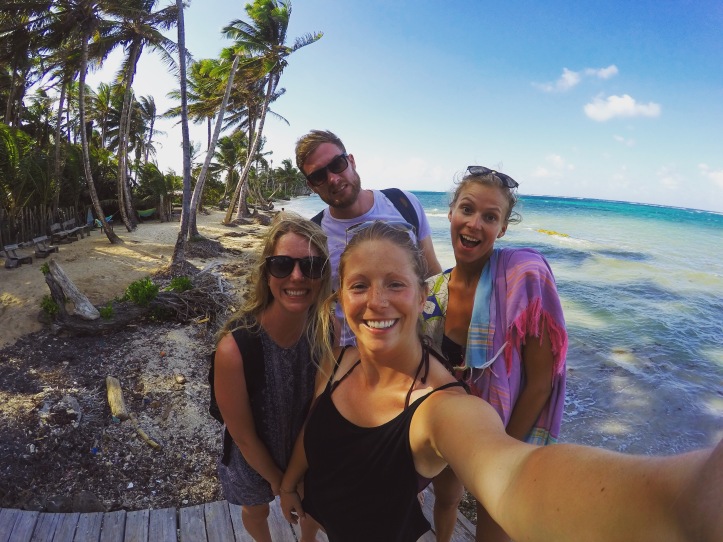 My favorite thing during my time on the island was the night dive I did – my first one ever. This is literally one of my worst fears- being trapped in deep dark water – but I did it anyway and ended up loving it. True, I did have to hold onto someone’s hand when we turned off the flash lights to look at the bioluminescence. This was definitely a highlight of my trip though- watching the bioluminescence at night underwater for a solid 5 minutes. I felt like I was in the movie Avatar with all the glowing trees. It was awesome.

All too soon my time on the island was up and it was time to take the boat back to Big Corn to catch my flight. For extra fun it was pouring rain the day I left so everyone got absolutely soaked in the open air boat on the way to the big island. The Dutchies from the danger dorm were not only on my flight from Big Corn to Managua, but were also on my same flight the following morning to Houston, so I stayed in the same hostel as them that night. Courtney was also in Managua, so the 5 of us splurged on a nice steak dinner at this really good restaurant called Los Ranchos. On the flight out the next day I could see at least 4 volcanoes at one time… I need to comeback and explore them all.

Nicaragua is one of my favorite countries that I’ve been to. It’s hard to compare this with the vastly different Patagonia region, which remains at the top of my favorites, but Nicaragua isn’t far behind. Two weeks felt like hardly enough time and I barely scratched the surface of what this country has to offer.  ﻿

As for now I’m about to start my first trip of my second season of tour guiding; a 21-day trip from New York to Los Angeles starting Wednesday!