I spent this summer working in McCarthy, in the middle of the biggest national park in the country. Many people have never heard of McCarthy, or Wrangell St Elias National Park for that matter. I hadn’t really heard of them either until coming down to Antarctica, funnily enough; a substantial percentage of Antarcticans work in Alaska in the offseason. I started asking around where I should apply for work, and remembered my friend Amelia had previously worked in McCarthy. Another friend suggested McCarthy as well, saying it reminded him a lot of the community we have in Antarctica. I’d come to find out there are a handful of current/former Antarcticans who call McCarthy home in the summer.

I applied for guiding jobs in a handful of touristy areas in Alaska, figuring between my prior guiding experience with American Adventures and my Search and Rescue experience I’d have a good shot. Among the companies I applied to, Kennicott Wilderness Guides (KWG) in McCarthy was my top choice. The motivation being I wanted to be inside the biggest national park in the country, and they offered a diverse range of trips including glacier hiking, ice climbing, packrafting and backpacking/basecamping. I was offered a job by a kayaking company in Seward before I even interviewed with KWG, and turned it down on a gamble that my interview would go well. Luckily it did and I started planning for a summer in the Wrangells.

MCarthy is at the end of a 60 mile dirt road from the closest highway, roughly 8 hours away from Anchorage which makes grocery shopping tricky. I wasn’t daunted by the remoteness of the area, and although I was a bit nervous about learning to guide more technical trips than I had previously, the thing I was most apprehensive about was how to shop for four months worth of food. Upon arrival in Anchorage, one of the owners of the company, Betsy, picked me and the other newbies up and we did a huge Costco run in Anchorage and I piled my cart high with over four months worth of food for the summer. Thankfully there were coworkers making trips often to Anchorage so we didn’t have to worry about resupplying throughout the summer.

Looking back on when I first arrived, it feels like a blur. We got settled into our guide house in Kennicott and went through a couple weeks of training. Our guide accommodations were certainly rustic – most houses in McCarthy are. Seven of us (four inside the house, three camping outside) shared a kitchen, outhouse and an outdoor shower. It could feel crowded in that house when everyone was home, but it was also nice to make meals together, cozy up in front of the wood burning fire or all pile onto the couches to watch a movie. After training was over, we had some free time to explore the area during the slow period in June before the season picked up. I was able to do two backpacking trips during that time and at the end of June my friend Jessie who I worked with in Crested Butte came up for a visit. Around the same time a group of ice friends were also in town for Fourth of July, which also coincided with the busiest period of the season, so after a slow start to the season, things went from 0 to 60 pretty fast. 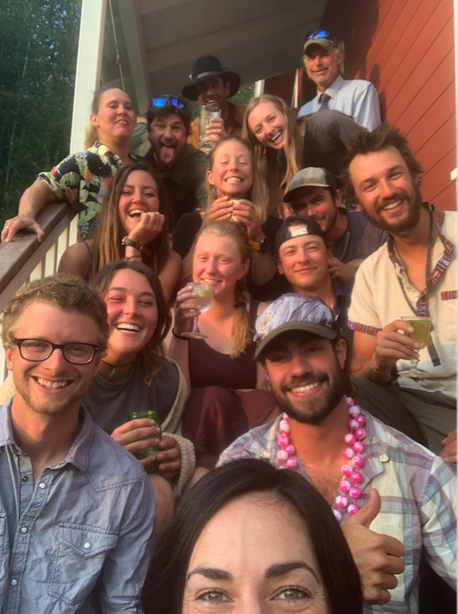 Across Alaska, July brought record-breaking heat and almost no rain, which was when the fires picked up. We had a few small fires near the park, but we experienced heavy smoke blowing up from the huge fire on the Kenai Peninsula. There were days the smoke was so bad we couldn’t see the mountains in our valley. Some of the other guides and I developed bad coughs during that period, but we were still guiding trips almost every single day.

Our days off always varied depending on the schedule, but I developed a sort of weekly routine. There was live music at least once a week at either the bar or the (one of two) restaurant(s) in town—often in July and August there was music twice a week. Usually the groups were local Alaskan bands, like a group of bush pilots from Talkeetna, but the California Honeydrops came through and played a show on their way to a festival in the Kenai Peninsula. Thursdays was usually open mic night and Fridays was softball. One thing I regret is not taking advantage of the yoga classes or other activities hosted by the Wrangell Mountain Center, (non-profit that connected people to nature through art and science). On my days off usually I was so exhausted that I would sleep in, go check on our group garden (before the moose destroyed it) and walk the other guides’ dogs while they were working. Some days I did rally to go explore by ice climbing, hiking or packrafting with other guides.

I got to lead a handful of backpacking trips for the company, which were the most sought after trips. My first backcountry trip was co-leading an REI Adventures group, which was really neat – we took them on a glacier hike before heading into the backcountry for three days before finishing up with a day of packrafting. Not long after I co-led a very similar package trip but for two families with three kids under 10, and at the end of the season I led my own backpacking trip with clients to a completely new (to me) area of the park, which was spectacular.

One awesome thing was that this was the first season the company had an equal number of female and male guides. It was really great to work with so many strong, amazing guide women! 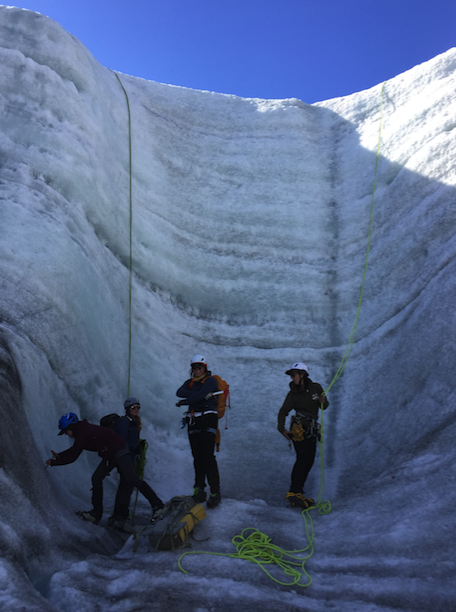 My parents came up at the end of the summer to visit and we went on a four-day basecamping trip to the Cugach Range south of McCarthy. I left McCarthy with them in early September, slightly before the official end of season. We drove to Valdez where we caught the ferry over to the Kenai Peninsula and played around Seward for a few days. This was my first time seeing other parts of Alaska besides Anchorage, which was neat, but it also made me appreciate McCarthy a lot. After Seward we drove to Anchorage, got our requisite pizza dinner at Moose’s Tooth – amazing pizza, terrible service should be their motto – and caught a plane to Juneau the following day. To celebrate my parent’s 40th wedding anniversary we decided to treat ourselves to a 7-day trip with Uncruise through the northern inside passage. Uncruise, as the name implies, is not your typical cruise; the large majority of the other ships traveling through the inside passage are massive multi thousand passenger ships with rooftop pools, arcades and endless amenities to distract your from the beauty of the surroundings you are traveling through. Our boat had 70 people and almost everyday we had two opportunities to get off the boat and bushwhack, shorewalk or go kayaking/SUPing. My dad and I even decided to go snorkeling – double 8 ml wetsuits! They also encouraged us to do a polar plunge – something that all 3 of us partook in. We started in Glacier Bay, where John Muir fell in love with Alaska, and wound our way through endless pine tree passages until we arrived in Sitka a week later. Turns out through working for American Adventures and in Antarctica, I had mutual friends with most of the guides working on the boat!

We had two days to wander around Sitka, which surprised me how large of a city it is for being located in a very isolated area. On my way back to Virginia I spent a night in Seattle with my aunts, went climbing in Las Vegas with Jessie (who visited McCarthy earlier in the summer) and was actually able to attend a wedding! Sadly I’ve missed a handful of friends’ weddings over the past couple years due to the seasonal lifestyle, but I made this one! And it was special because it was my friend Meggie’s who I’ve known since I was barely one year old. The wedding, which was in Boston, was a great excuse to reunite with friends and family-like-friends, including our friend Jaimie and her lil bub. I had but a few days in Virginia to unpack, repack and squeeze in some time with friends and family before flying to New Zealand to start another season in Antarctica, where I am currently battling slow internet to upload this post. I’ll be here until February 2020 and then hopefully back in McCarthy next summer!